Unplug & Plug In: 4 Ways To Engage Kids and Disconnect from Screen Time 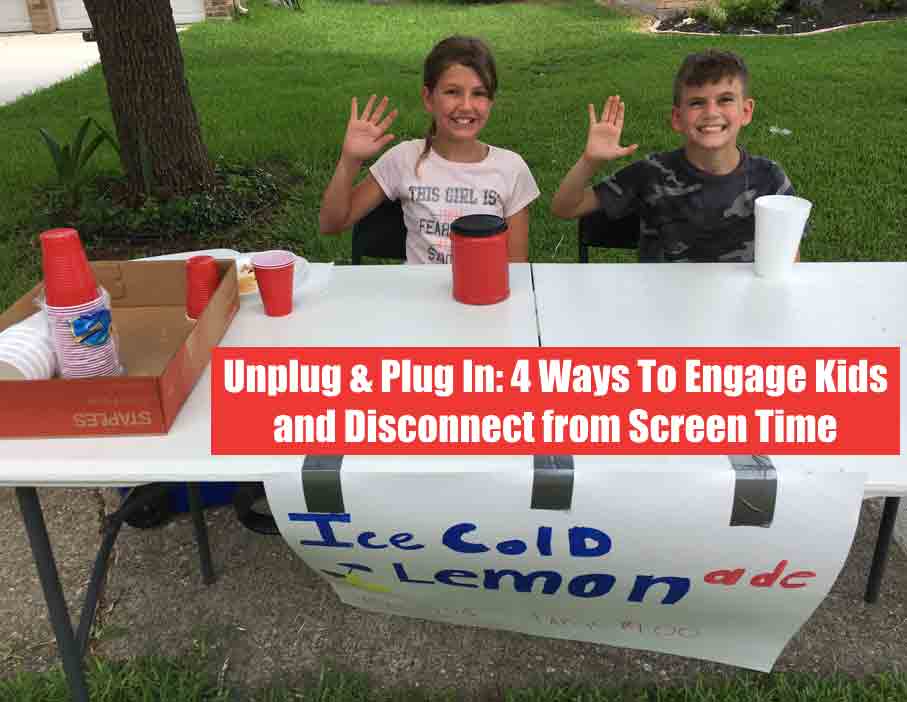 It was late last spring when I first heard an intermediate-aged student use the word rage while talking about his gaming. It was around the table at my Counselor Cafe and it went something like this: Sometimes I get so hooked in to my game that I start to rage. Wait, what?

To be fair, I’d actually heard that in my own home, when our teenager gets so involved in his games that he starts yelling at the screen, but I hadn’t heard it referred to as raging until that lunch with my learners.

And it wasn’t just the boys who could relate. One of the third-grade girls told me she rages all of the time at her video games. When I inquired about her options, like walking away and giving her brain a break, she said that her mom suggests the same thing, but that just makes her want to rage at her mom.

Yikes! This new information took gaming to a whole new level for me and I wanted to know more. So I started to informally survey my students. The more children I asked, the more it became clear that raging is definitely something they are doing regardless of whether they’re catching Pokemon, building with Minecraft, or battling in Fortnite. It also seemed to be something they aren’t necessarily all that comfortable with or proud of. One girl even referred to her playing as an addiction and several of them asked me how they might get less intense about their games.

This rings true with a recent survey in which Screen Education found that teens want to get off of their devices but can’t. In fact, 68% of the teens reported attempting to decrease the amount time spent on their phones.

Our older son tells the story of a group of his college friends who decided that they wanted a screen-free dinner, so they all put their phones in the middle of the table with the agreement that the first one to reach for his or her phone would pay for everyone’s meal that night. The one friend that they predicted wouldn’t be able to do it didn’t last for very long and ended up picking up the tab because he picked up his phone.

It sounds as though our future generation could use some help from the generation that put the screens in their hands in the first place. Consider these suggestions to help them unplug from their devices and plug in to the wonder of the world around them:

1. Model disconnecting to connect. You’d be surprised at how many students have told me that their “mom is always on her phone.” Monitoring and limiting our own usage is a great start. Designate certain times of the day to put the phone away and certain places in the house as a device-free zone. You might also try managing your settings. Make sure that their games aren’t always on and barraging them with bells and whistles, bidding them non-stop to come back and play. I tried turning off notifications with my Twitter account and found that I am, indeed, less likely to check in if I don’t see a red number inviting me to check it out. Turn devices off at night and put them in a central location out of the bedroom so that they aren’t disturbing your child’s sleep patterns.

2. Schedule family-time activities. Attempting to extinguish an unwanted behavior is typically coupled with finding a desired replacement behavior. When we call for family game time, for example, the video games go off; our desired behavior of playing a board game like Ticket To Ride or a game of cards like Hearts replaces the computer time spent playing Roller Coaster Tycoon. Try inviting your children outside to get some exercise and fresh air. Too hot right now? Schedule some time creating in the kitchen, putting together a jigsaw puzzle, building with Legos, coloring, drawing, or reading.

3. Connect with friends face to face. We must resist the urge to let a battery replace a heartbeat. Although our digital world gives our kids the appearance that they are interacting with friends, nothing can replace that good ole heart to heart time with another human being. Make sure to schedule get togethers, outings and events to give your children real-time opportunities to sharpen their social skills by dialoguing with peers in person. There is no substitute for sharpening those problem-solving skills like a game of tag or Marco Polo with your BFF. Better yet, organize a game of kick ball or bicycle olympics in the nearest cul-de-sac and get ready to experience some good old-fashioned fun.

4. Leave portable devices at home. Whether you’re headed to the local park or to the neighborhood pool, to the bowling alley or to the movie theater, to school or to church, leave those portable gaming devices home. Encourage your kids to look out the window during the car ride and be mindful of their surroundings. Play the corny car games that you played as a child. Once you’re at your destination, continue noticing the sights, sounds, scents as you unwrap the present with your child and enjoy being in the moment connecting and conversing with one another.

When we can replace raging with relationships, then we’ll really be ahead of the game. Anyone up for a game of Risk or Life?